The publication in 1859 of the Origin of Species by Charles Darwin made a marked epoch in my own mental development, as it did in that of human thought generally. Its effect was to demolish a multitude of dogmatic barriers by a single stroke, and to arouse a spirit of rebellion against all ancient authorities whose positive and unauthenticated statements were contradicted by modern science.

I doubt, however, whether any instance has occurred in which the perversity of the educated classes in misunderstanding what they attempted to discuss was more painfully conspicuous.    -- Francis Galton, Memories of My Life

Memories of My Life
by Francis Galton.
Facsimile of full text in PDF format (London: Methuen, 1908).  Several chapters have also been transcribed into text.

The Intelligence Quotient of Francis Galton in Childhood by Lewis Terman  American Journal of Psychology 28 (1917): 209-215

The Life, Letters and Labours of Francis Galton
by Karl Pearson.
Facsimile of full text in PDF format.

A new biography of Galton was published in November 2001.  By the biologist Nicholas Wright Gillham, it was issued by Oxford University Press.

Michael Bulmer's study of Galton has now been published.

An older biography by D.W. Forrest, Francis Galton: The Life and Work of a Victorian Genius, is out of print but widely available second-hand.

A new biography by Raymond Fancher is also in progress. Fancher has also written several articles on Galton, as a result of research toward the new biography. 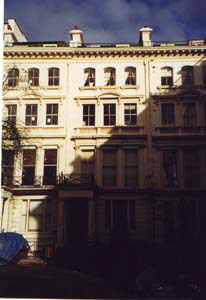 42 Rutland Gate, London, now much altered since Galton lived there.

When I was a boy, my father, who was a country doctor, used to take me on his rounds to visit his patients. Of these by far the most impressive was the squire of a neighbouring village called Claverdon, a small Warwickshire hamlet, lying between Stratford-on-Avon and Birmingham. The squire was an octogenarian named Darwin Galton. On his mother's side he was the grandson of Erasmus Darwin, physician, zoologist, botanist, and poet, and on his father's of a Birmingham Quaker who had made his money by manufacturing rifles. He himself was the eldest son in a family of nine. And, when he was fit, I was sometimes taken up to see him, and so met many other members of the same family, including the youngest, called Frank or Francis.

Francis Galton was one of the most distinguished-looking people I have ever known-tall, slim, neatly dressed, with a forehead like the dome of St. Paul's My father, who was an ardent Darwinian, used to try to inspire me with intellectual ambitions of my own by telling me of the remarkable investigations carried out and published by this exceptionally brilliant member of an exceptionally brilliant family. I met him again as an undergraduate at Oxford, and later in London shortly before his death. He died in January, 1911, at Haslemere (Surrey), in a house he had taken to escape the London winter; and his body now lies in the family vault in Claverdon churchyard. 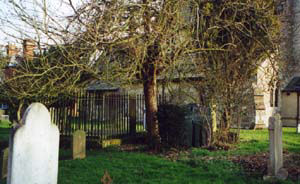 The fenced Galton family plot in the Claverdon graveyard.