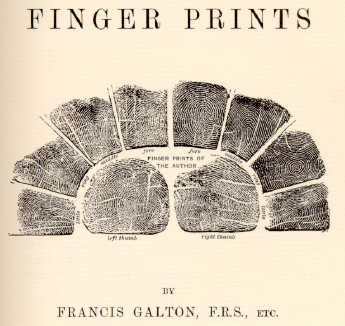 "THE palms of the hands and the soles of the feet are covered with two totally distinct classes of marks. The most conspicuous are the creases or folds of the skin which interest the followers of palmistry, but which are no more significant to others than the creases in old clothes ; they show the lines of most frequent flexure, and nothing more. The least conspicuous marks, but the most numerous by far, are the so-called papillary ridges ; they form the subject of the present book. If they had been only twice as large as they are, they would have attracted general attention and been commented on from the earliest times. Had Dean Swift known and thought of them, when writing about the Brobdingnags, whom he constructs on a scale twelve times as great as our own, he would certainly have made Gulliver express horror at the ribbed fingers of the giants who handled him. The ridges on their palms would have been as broad as the thongs of our coach-whips.

Let no one despise the ridges on account of their smallness, for they are in some respects the most important of all anthropological data. We shall see that they form patterns, considerable in size and of a curious variety of shape,, whose boundaries can be firmly outlined, and which are little worlds in themselves. They have the unique merit of retaining all their peculiarities unchanged throughout life, and afford in consequence an incomparably surer criterion of identity than any other bodily feature. They may be made to throw welcome light on some of the most interesting biological questions of the day, such as heredity, symmetry, correlation, and the nature of genera and species. A representation of their lineations is easily secured in a self-recorded form, by inking the fingers in the way that will be explained, and pressing them on paper. There is no prejudice to be overcome in procuring these most trustworthy sign-manuals, no vanity to be pacified, no untruths to be guarded against. -

My attention was first drawn to the ridges in 1888 when preparing a lecture on Personal Identification for the Royal Institution, which had for its principal object an account of the anthropometric method of Bertillon, then newly introduced into the prison administration of France. Wishing to treat the subject generally, and having a vague knowledge of the value sometimes assigned to finger marks, I made inquiries, and was surprised to find, both how much had been done, and how much there remained to do, before establishing their theoretical value and practical utility.

Enough was then seen to show that the subject was of real importance, and I resolved to investigate it; all the more so, as the modern processes of photographic printing would enable the evidence of such results as might be arrived at, to be presented to the reader on an enlarged and easily legible form, and in a trustworthy shape. Those that are put forward in the following pages, admit of considerable extension and improvement, and it is only the fact that an account of them seems useful, which causes me to delay no further before submitting what has thus far been attained, to the criticism of others."